Faking GPS can be used for different purposes. Some people use it for gaming, while some use it for professional purposes. However, some people might take illegal advantage of this tool, but it is not our intention to promote such practices. We are only educating people that such things also exist, and you can also use GPS spoofing tools when in need.

Let us look at some of the most effective GPS spoofing tools on the internet today.

Part 1. How does the GPS Spoofer Work?

Part 1. How does the GPS Spoofer Work?

GPS spoofing’s objective is to override the original location of the device and change it with another. GPS spoofer works in a way that it uses a radio transmitter to attack and then broadcast fake signals of GPS. This fake signal then interferes with original signals and then displays the fake location or GPS on the user’s device. However, GPS spoofing is never free because it is an expensive process. It has both civilian and military advantages. But nowadays, anyone can get their hands on such applications.

To build your GPS spoofer, the user will only require a radio signal transmitter that is portable. With some alterations, the location can be changed as it works with satellites and transmits radio signals to the device that uses GPS and pinpoints the location.

Nord VPN is one of the biggest names in the industry. It works efficiently and does not break the connection of GPS spoofing. It has very high security, and people can easily rely on it.

Nord VPN is mostly used for streaming services as it can unblock the restricted content of any online broadcasting subscription.

Surfshark is another great VPN that allows the user GPS spoofing. It is the only tool that has built-in GPS spoofing and does not require any other tool for it.

Surfshark is extremely safe and powerful, but sadly, it is only available on Android devices. It is incredibly inexpensive and offers great features.

Among the above-mentioned VPN tools, this is the best of them all. It has great services and provides unbeatable features to the user. However, Express VPN does not have a built-in fake GPS. It is compatible with different operating systems, and users get a free trial as well.

Express VPN has a user rating of 5/5.

If you are looking for the best GPS spoofing app, then UnicTool TailorGo is the best option anyone can go for. It not only allows the user to spoof GPS location but also allows the user to simulate GPS movement. In simulating GPS, it has two different modes, namely two-spot mode and multi-spot mode. Let us see how this tool works. 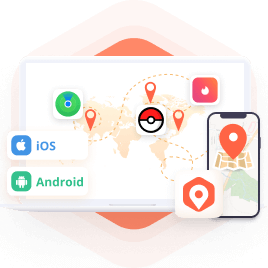 The iOS device and the computer should be connected to the same WiFi.

The users have rated this app 5/5.

It is an Android app that can be installed from the Play Store for free. As it is a free tool, extraordinary features cannot be expected of it. It works fine but sometimes interrupts the connection as it does not have properly defined servers for GPS spoofing. However, it can teleport the user in a few seconds but can result in being caught by the authorities.

Fake GPS Location by Hola has a user rating of 4/5.

Fake GPS GO Location Spoofer is a free Android app that allows users to change their location anywhere they want. It has its usage and advantages. There are different region contents on different websites. Due to this reason, the user requires a GPS spoofing app. There are many apps available in the market, but only a few are free that offer GPS location spoofing.

The users have rated this app 4/5.

1.What is the impact of GPS spoofing?

2. What can be done about GPS spoofing?

3.What is GPS spoofing?

GPS spoofing is just a radio signal transmitter that overrides the current signal from the satellite and changes the location. There are different VPNs and apps available for GPS spoofing, and the user can use any app mentioned in the article to change the location.

In this article, we have mentioned some of the best VPN and GPS spoofing tools in the market. Although there are many tools available, all of them have their features, pros and cons, and pricing. However, the best tool is UnicTool TailorGo, as it has a wide range of features and diverse usage. It has a trial version as well for people that use and download the tool to check its GPS spoofing capabilities.